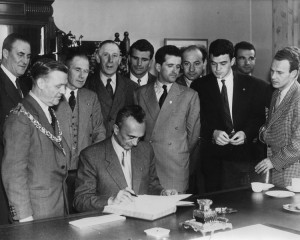 To celebrate recovery from the Second World War the Festival of Britain took place in May 1951, with a number of uplifting events. Included was a series of football matches. Sunderland AFC’s contribution to the festivities was a friendly against crack Yugoslav side Red Star Belgrade at Roker Park, a game that the hosts would win 1-0 with a goal from Ivor Broadis after 34 minutes. Here we see the Red Star President Mita Miljkovi_ signing an agreement of friendship with the Lord Mayor (Sir) Jack Cohen in attendance as well as Sunderland manager Bill Murray and the club chairman Stanley Ritson. The Red Star representatives include the manager, Ljubiša Broćić.